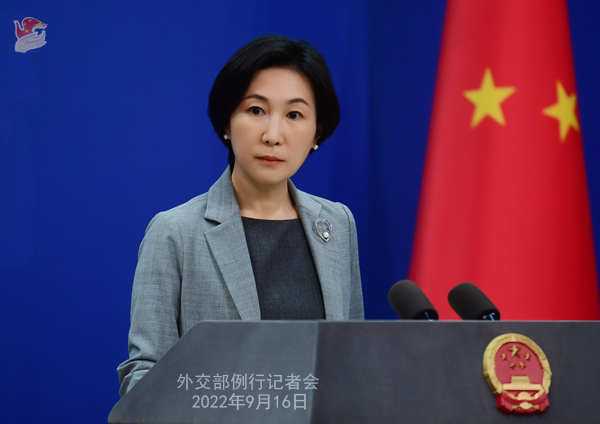 CCTV: President Xi Jinping arrived in Samarkand and began his state visit to Uzbekistan yesterday. Could you share more information with us?

President Xi had a fruitful state visit to Uzbekistan. The bilateral talks were candid and deep-going. The meeting of heads of state of China, Russia and Mongolia was positive and results-oriented.

Parties expressed their readiness to further step up strategic communication and coordination with China, and show respect for each other’s independence, sovereignty and territorial integrity and firm support for each other’s core interests and major concerns. They stressed their commitment to the one-China principle.

Parties made it clear that they attach high importance to the high-quality cooperation under the Belt and Road Initiative and stand ready to form greater synergy between the BRI and their national development strategies. Relevant departments of China, Kyrgyzstan and Uzbekistan signed a trilateral memorandum of understanding concerning cooperation on the China-Kyrgyzstan-Uzbekistan railway (the section in Kyrgyzstan).

Parties spoke highly of the Shanghai Cooperation Organization’s important role in upholding regional peace, security and stability. They said the authority and impact of the SCO has continued to increase and they were looking forward to positive outcomes of the SCO Samarkand summit.

Parties highly commended the Global Development Initiative and the Global Security Initiative proposed by the Chinese side and expressed readiness to jointly work with China to implement them to jointly build a community with a shared future for mankind.

Parties said that in the face of an increasingly complex international landscape, we should strengthen solidarity and coordination, respect the UN Charter and the basic principles of international law, pursue UN-centered multilateralism and jointly uphold international justice and fairness.

Parties expressed congratulations to the upcoming 20th National Congress of the Communist Party of China and wished the meeting every success. 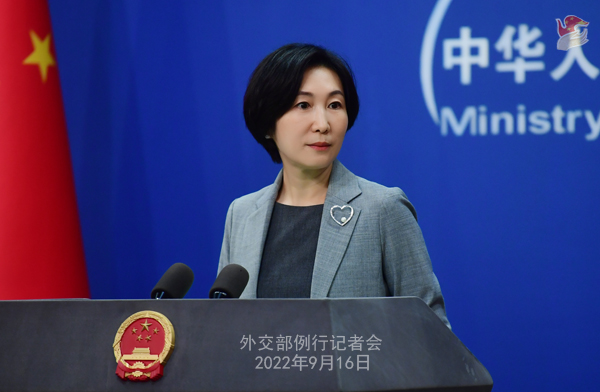 AFP: During yesterday’s meeting between President Xi Jinping and President Vladimir Putin, the two sides agreed to extend mutual support on issues concerning each other’s core interests. Does this include China’s support for Russia on the Ukraine issue?

Mao Ning: On September 15, President Xi Jinping held a bilateral meeting with Russian President Vladimir Putin at Forumlar Majmuasi Complex in Samarkand to exchange views on China-Russia relations and international and regional issues of shared interest. China and Russia offer each other strong support on issues concerning each other’s core interests. As each other’s largest neighbors and comprehensive strategic partners of coordination for a new era, China and Russia have always followed the guidance of the common understandings between our two heads of state in growing bilateral relations and advancing exchange and cooperation in various sectors. If there’s anything more you wish to know, I’d like to refer you to our readout.

MASTV: Spokesperson of the Taiwan authorities said on September 15 that Taiwan will send three persons to attend the state funeral of former Japanese Prime Minister Shinzo Abe. Do you have any comment? Is China still going to send someone to attend Abe’s state funeral?

Mao Ning: Taiwan is an inalienable part of China. The one-China principle is a widely accepted norm in international relations and a prevailing consensus of the international community. China urges Japan to abide by the principles of the four political documents between China and Japan and the serious political commitments it previously made, handle relevant matters in strict accordance with the one-China principle, and refrain from providing any platform or opportunity for “Taiwan independence” elements to take advantage of the occasion for political manipulation.

As for Japan’s invitation to China for the state funeral of former Prime Minister Shinzo Abe, China and Japan are in communication over this. I do not have any information to offer at the moment.

Dragon TV: Armed conflicts broke out between Azerbaijani and Armenian troops at the border between the two countries recently. Does China have any comments?

Mao Ning: Azerbaijan and Armenia are both China’s friendly cooperation partners. We hope the two sides will observe the agreed ceasefire, avoid further escalation of the situation and resolve tensions and differences through political dialogue so that there can be peace and stability in the region and the people can live in peace.

AFP: Will President Xi meet with Prime Minister Modi today? If yes, what will they discuss?

Mao Ning: I have no information to offer.

Global Times: After the US announced a planned arms sale worth $1.106 billion to Taiwan on September 2, the Spokesperson for the Chinese Foreign Ministry said that China will “firmly defend our own sovereignty and security interests”. Do you have any updates about that?

Mao Ning: US arms sales to China’s Taiwan region seriously violate the one-China principle and the provisions of the three China-US joint communiqués, especially the August 17 Communiqué of 1982. The arms sales gravely undermine China’s sovereignty and security interests, and severely harm China-US relations and peace and stability in the Taiwan Strait. China firmly opposes and strongly condemns the sales.

China once again urges the US government and relevant parties to abide by the one-China principle and the provisions of the three China-US joint communiqués, stop arms sales to Taiwan and military contact with Taiwan, and stop creating factors that could lead to tensions in the Taiwan Strait. China will continue to take all necessary measures in light of the situation to firmly defend its own sovereignty and security interests. 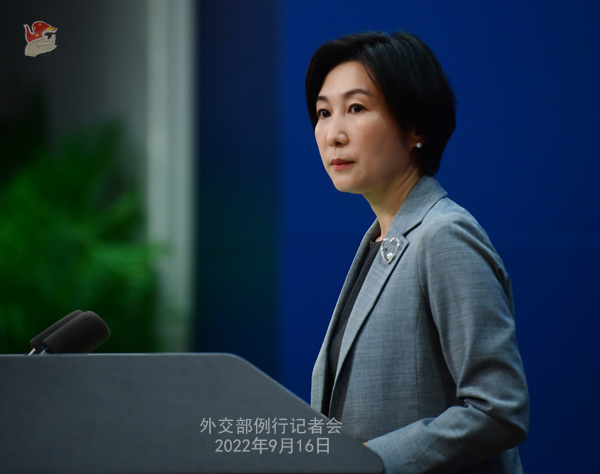 Beijing Daily: On September 15, the Director-General of the Organization for the Prohibition of Chemical Weapons (OPCW) and a delegation of the OPCW Executive Council paid a virtual visit to China and exchanged views with China and Japan on Japan’s abandoned chemical weapons (ACWs) in China. Can you share more information about the visit?

Mao Ning: At the joint invitation of China and Japan, Fernando Arias, Director-General of the OPCW, and Ziad M.D. Al Atiyah, Chairperson of the Executive Council of the OPCW and Permanent Representative of Saudi Arabia to the OPCW, led a delegation of more than 40 members to visit China virtually on September 15 for the specific issue you mentioned. The delegation consists of diplomatic envoys posted in the OPCW from more than 10 countries including Russia, Malaysia and Kenya and representatives from the US, the UK and Germany.

During the visit, Vice Foreign Minister Deng Li met with Director-General Arias and elaborated on China’s position and concerns on issues related to accelerating the destruction of Japanese ACWs. The delegation was briefed by officials from China and Japan on the overall situation and destruction progress of Japanese ACWs. They also visited virtually the largest burial site of Japanese ACWs discovered so far, which is located in Haerba Ling in Dunhua City, Jilin Province. The visit yielded good results. The delegation believes that great importance should be attached to the issue of Japanese ACWs, and efforts should be made to complete their total destruction as soon as possible, undo the harm to China, and build “a world free of chemical weapons”.

I want to stress that Japanese ACWs are a major issue left over from history. Japan made an unequivocal, solemn commitment to China and the international community on this issue. This year marks the 50th anniversary of the normalization of China-Japan diplomatic relations and the 25th anniversary of the entry into force of the Chemical Weapons Convention. The destruction process of Japanese ACWs has seriously lagged behind, and missed the deadlines for the destruction many times. We hope that the Japanese side will take seriously China’s grave concerns and the strong appeal of the international community, show the political will to fulfill its international obligations and the political courage to redress its historical crimes, and earnestly increase input to completely and thoroughly eliminate the harm of ACWs as soon as possible and return a clean land to the Chinese people.

Mao Ning: Before answering your question, let me make it clear there is no so-called arbitrary detention of Uyghurs or human rights issues in Xinjiang. As to this bilateral meeting, I’d refer you to the press release the Chinese side has put out.

Bloomberg: There’s a report that the UK Parliament refused Chinese delegation access to the Parliament building to attend the lying-in-state of the former Queen Elizabeth II. Can you confirm that this happened? And do you have any comment on this matter?

Mao Ning: I haven’t seen the report you mentioned. I want to point out that the state funeral of Her Majesty Queen Elizabeth II is an important activity of the UK. Foreign delegations attend the activity at the invitation of the UK side to show respect to the late Queen and the importance they attach to the UK. As the host, the UK side is certainly familiar with diplomatic protocols and proper manners of receiving guests.

RIA Novosti: A delegation from the Czech Republic will visit Taiwan on Sunday. What’s the Foreign Ministry’s comment?

Mao Ning: There is only one China in the world and Taiwan is an inalienable part of China’s territory. The Government of the People’s Republic of China is the sole legal government representing the whole of China. The Taiwan question is China’s internal affair. It concerns China’s sovereignty and territorial integrity and bears on China’s core interests. We firmly oppose all forms of official interaction between the Taiwan region and countries having diplomatic ties with China. We firmly oppose external forces’ attempt to use the Taiwan question to interfere in China’s internal affairs. The Chinese government and people have unwavering resolve and commitment to safeguard our sovereignty and territorial integrity. We urge the Czech politicians to earnestly abide by the one-China principle, refrain from sending any wrong signal to “Taiwan independence” separatist forces, and avoid inflicting further damage to the political foundation of the development of bilateral relations.

Reuters: A British Foreign Office source told Reuters that a Chinese leader is expected to attend Queen Elizabeth II’s funeral on Monday. Does the foreign ministry have any comments?

Mao Ning: China is considering sending a high-level delegation to the state funeral of Queen Elizabeth II. We will release information in due course. Please check back for updates.

AFP: President Xi Jinping met President Ebrahim Raisi today. Did President Xi urge his counterpart to revive the JCPOA? Is China ready to support Iran’s SCO membership when issues related to the JCPOA are unresolved yet?

Mao Ning: China has put out a readout about the meeting between President Xi and President Raisi and you may refer to that.

Reuters: The President of Mongolia said on Thursday while meeting with President Xi and President Putin that he supports the construction of oil and gas pipelines from Russia to China via Mongolia. However, this specific point did not appear in the Chinese readout of this trilateral meeting. Does the foreign ministry have any comment on these remarks made by the Mongolian President?

Mao Ning: The readout of the meeting of the heads of state of China, Russia and Mongolia says the three countries agreed to actively move forward the project on the Mongolian section of the China-Russia natural gas pipeline.