When UConn School of Law colleagues Anne Rajotte and Jessica Rubin were approached about writing the second edition of “Connecticut Legal Research,” they agreed but only on the condition that they do it together.

Rajotte, head of research and instruction at the Thomas J. Meskill Law Library, and Rubin, associate dean for experiential education, bring a wealth of experience around legal research to the book. 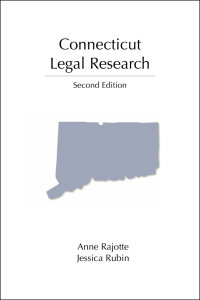 “With ‘Connecticut Legal Research,’ Anne Rajotte and Jessica Rubin offer not only a comprehensive guide to Connecticut case law, legislation, and statutes for practitioners and law students, but also a practical and accessible guide on the research skills and writing strategies that every attorney can benefit from,” said Richard Wilson, associate dean for faculty development.

“Connecticut Legal Research” was one of five new editions published in Carolina Academic Press’ Legal Research Series this year. It was a complete overhaul of the 2009 first edition. The goal of the book is to explain research skills and strategies as well as provide instruction on legal writing and citations with a focus on Connecticut practice, including a chapter reflecting the state’s role in the insurance industry.

The co-authors and publisher wanted it to be accessible to law students, paralegals and practitioners. Rajotte and Rubin drew on experience fielding questions from students and lawyers within and outside of UConn, as well as practicing law themselves, to address the wide audience.

“We both approached writing this book from the user’s perspective, considering what was most useful and writing to explain that information,” said Rubin, who is a clinical professor as well as associate dean. “We considered what skills and knowledge our students and practitioners need and tried to convey that in a user-friendly format.”

In her position overseeing the library’s research services, Rajotte receives calls from other lawyers asking research questions. She also teaches advanced legal research as an adjunct professor. Those two roles provided further insight into how the book would be used.

She wanted to be sure to include information on researching Connecticut historical statutes. “That was something I had to learn by experience,” Rajotte said. “There was no guide written anywhere that I knew of.”

Rajotte and Rubin tried to reach a balance of a broad reach with enough detail to be useful, not overly simple. They want anyone who uses this book to come away feeling it helped them, whether in performing a task, answering a question for a client, or something else.

The publisher approached Rajotte and Rubin based on the recommendation of Richard Michael Fischl, a UConn Law professor who has an existing relationship with Carolina Academic Press. The co-authors also credited their research assistant Marla Katz ’22 with helping to make the book student-friendly and aesthetically pleasing with graphics.

Feds Will Not Provide Emergencies Act Inquiry the Legal Advice They Received for Use of Act: Justice Minister

How can Ukraine hold Russia accountable for torture and war crimes?